To many, he will be remembered as a passionate lover of racing that made the sport more accessible to fans. He also inspired many broadcasters to pursue the sport as a viable career path for their talents. -The Outsider

Sad news from the world of stock car racing as a veteran NASCAR TV personality,  broadcaster, and a mainstay on the circuit for years, passed away unexpectedly on Friday night.

The racing community was shocked to learn that Randy Pemberton, born on September 21, 1959, in Ballston Spa, passed away suddenly at the age of 62.

In his younger years, Randy’s love for basketball shined through, when he starred and played for Ballston Spa High School and later at Albany Business College.  But it was his passion for NASCAR and broadcasting where his true talents would be unearthed.

For many years Pemberton was a mainstay on the NASCAR circuit both as an announcer and popular TV show host.

He would serve as the voice of Inside Winston Cup Racing on TNN and he also hosted a call-in show where racing fans could contribute live to the broadcast, similar to radio formats.

Here’s some Twitter reaction when the NASCAR community learned of the sad news:

Awful news to hear that Randy Pemberton passed away. He was a tremendous broadcaster on Inside Winston Cup and Racehub. Here’s a great moment where he falls for a prank from Rob Moroso pic.twitter.com/o6LbgdLZsu

Randy Pemberton has passed away.

He was a staple on TV and was a true talent in every role he held.

This is Randy introducing the 11/12/95 episode of “Inside Winston Cup Racing”. pic.twitter.com/Fque1EgtzG

Road Trip! 21 Things to Do and See (and Eat) in Broome County!

Alex Miller Devastated by Death of His Grandfather

Best of the Web

The Latest From Big Kat

Welcome back to Big Cat - Country with Attitude

It appears that you already have an account created within our VIP network of sites on . To keep your personal information safe, we need to verify that it's really you. To activate your account, please confirm your password. When you have confirmed your password, you will be able to log in through Facebook on both sites.

Welcome back to Big Cat - Country with Attitude

It appears that you already have an account on this site associated with . To connect your existing account just click on the account activation button below. You will maintain your existing VIP profile. After you do this, you will be able to always log in to http://bigcat921.com using your original account information.

Please fill out the information below to help us provide you a better experience.

Big Cat - Country with Attitude brought to you by:

Big Cat - Country with Attitude brought to you by: 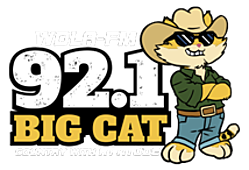 Sign up to have news and information about your community delivered to your email.
Like Us on Facebook
Big Cat - Country with Attitude brought to you by: